In 1992 players from The Half Crown Pétanque Club were invited to participate in the opening ceremony for a new Pétanque terrain in Victoria Park, Rugby which was sponsored by the Rugby/Evreux Sports Twinning Association in conjunction with Rugby Borough Council which is formally twinned with Evreux in Normandy, France. The Mayor of Evreux invited us to join in the twinning events in Evreux the following year, and we have enjoyed the privileges of exchange twinning each year since then with between 10 and 20 of our club members travelling to France one year and a similar number of visitors from the Navarre Club de Pétanque, Evreux visiting Stockton the next year. The pictures above show the Half Crown team which visited Evreux in 2001.

We also had a bi-annual twinning arrangement with Brainoise Pétanque, from Braine near the Champagne Region in North East France, which began some 10 years ago through personal friends of our club members. In 2004, 21 friends from Braine came to Stockton for a most enjoyable weekend, as captured in the pictures above. 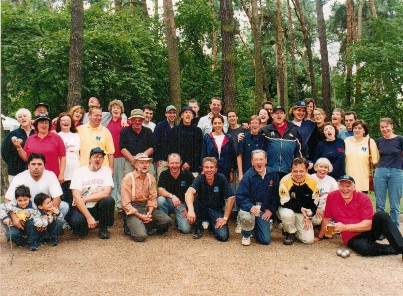 We have a similar arrangement with the ‘Encore Une Fois’ Pétanque Club from Russelsheim in Germany, again sponsored initially through the civic twinning between Rugby and Russelsheim, and which started in 1997. The picture above shows the group from Stockton who visited Russelsheim in 2006.